The Switched Current Power Converter (SCPC) is a break through power conversion technology with extremely fast dynamic response.  Its output impedance is less than 0.5 mΩ to 5 MHz. With switched charge circuits, the SCPC can respond very quickly and precisely to VID commands. Because the response is so fast, the usual bulk capacitors are not used. 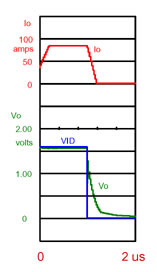 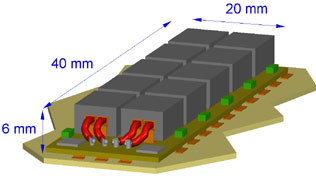 Switched Current Power Converters (pdf)
The characteristics and theory of operation of the SCPC is presented.  Switched charge circuits may be added to the SCPC to provide extremely fast and precise step voltage changes, even with simultaneous load changes.  Total charge measurement is used, because neither current measurement nor voltage measurement is fast enough for control purposes.
Revised March 13, 2006.  61 pages, 1.5 M.

Total Charge Measurement and Control (pdf)
A very fast power converter needs a very fast measurement and control.  The remotely sensed output voltage Vo of a power converter is not a suitable control input, as it takes too long to settle.  The output current is even worse, and measuring it is horribly complicated.  The solution is to measure the total charge on the distributed capacitors in the power train.  It is very simple, very fast and unconditionally stable.  With total charge control, a very well controlled high driving voltage overcomes the impedance of the motherboard and socket, allowing very fast di/dt with no overshoot and a 1 us settling time, for both rapid increases in load and load dump.
Revised April 18, 2006.  15 pages, 289 k. 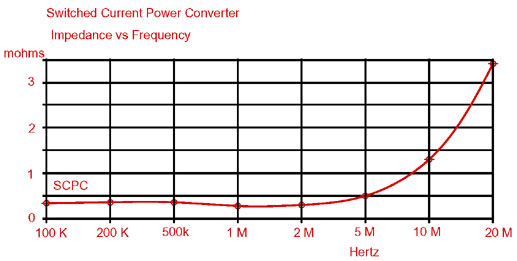 The SCPC was modeled in SPICE using the parasitic impedances of Intel ® VR 10.2, (except that the bulk capacitors are not needed and were not included).  The large-signal output impedance was modeled and graphed, as well as the response to step load changes.  The response of the SCPC to VID change was also modeled and plotted for several scenarios, with and without switched charge circuits.
Revised March 12, 2006.  50 pages, 1.55 M.

Simple Power IC (pdf)
Design of economical switching MOSFETs is key to making a practical SCPC. A fully integrated power IC requires a complex and expensive manufacturing process, requiring many masks, diffusions, and so forth.  The simple power IC is based on the premise that the process for making a discrete MOSFET can be use if all of the MOSFETs are constrained to be the same type except for their active area.
March 3, 2006.  10 pages, 250 k.

Saving Power by Using Switched Current Power Converters (pdf)
Power saving strategies and the power usage of the Switched Current Power Converter are discussed for various operating modes and scenarios.  The greatest opportunity for saving energy in a computer system is realized by allowing the processor to be in a reduced power state (or be turned off entirely) more of the time.
Revised March 12, 2006.  19 pages, 174 k.

Do Voltage and Clock Switching
Really Save Energy? (pdf)
A  processor uses less power if it is operated at a lower voltage and a slower clock rate.  But does this really save energy? If a processor turns on, runs a specific task that is a fixed number of clock cycles, then turns off, the energy consumption is nearly the same at any voltage and clock speed!
Revised March 13, 2006.  5 pages, 38 k.

Dynamic Power Links (pdf)
A random search of the WWW turned up some odds and ends on the trends in dynamic power management.  The notes contain a number of interesting links.
September 20, 2005.  10 pages, 175 k.

Coaxial Push Pull Transformers (pdf)
The coaxial push pull transformer uses the same magnetic core structures as the flat matrix transformer, and shares its characteristic low profile and excellent thermal dissipation.  A new winding design using a coaxial arrangement between the primary and the secondary windings has near ideal coupling and near zero leakage inductance.  The absence of multiple layers of copper eliminates many of the more troublesome high frequency effects.  The coaxial push pull transformer is ideal for a "dc-dc transformer".  A variant has a turns ration that can be varied electronically, so the "dc-dc transformer" can have a precise output voltage even with input and load regulation.
Revised March 14, 2006.  26 pages, 227 k.